Sequestration of CO2 in Brines.

Having read most of the more recent research papers we conclude that they result in methods that may work well with known made up solutions of salts in laboratories but not so well with real brines especially if they vary from the norm of seawater, desal water or MgCl2 bitterns. The current supply chain carbon and dollar economics are not favourable to any of the methods so far described and all would have a delitarious effect on the wider environment.

The dollar cost or value, carbon and environmental impacts as well as the overall moleconomics of the processes discussed are not well understood beyond the laboratory yet whatever large scale process we adopt will have wide impacts on the environment and have to deal with the variability of inputs.

Nevertheless, I thank academics and students, you have provided some useful ideas and knowledge such as on how to accelerate the conversion of nesquehonite to magnesite. The world is in a parlous state and it's time to add a few more obvious steps to the process and make it a large scale continuous computer controlled one.

For sequestration in brines the initial reactions involves the dissolution of CO₂ into the brine to form carbonic acid, which dissociates to form HCO₃⁻ and CO₃⁻ ions via the following reaction sequence. 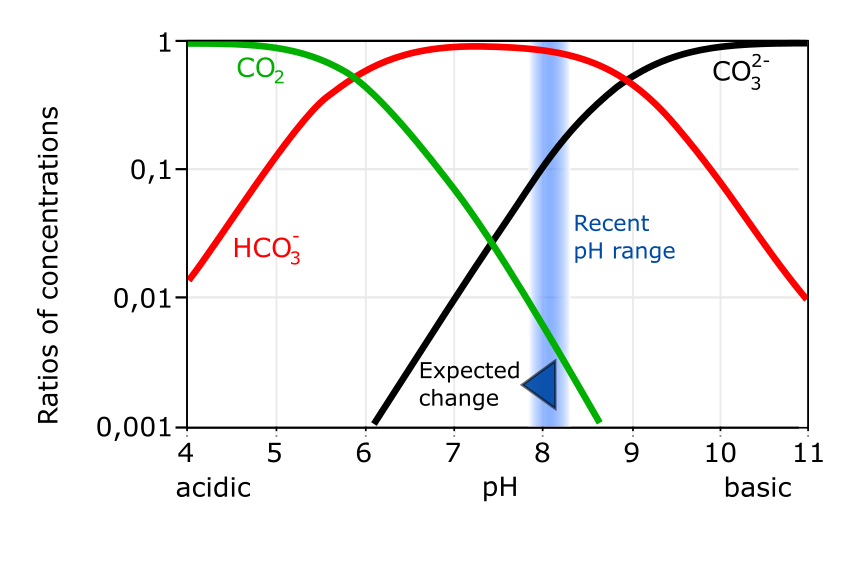 Speciation of carbon dioxide in water (Wikipedia, no reference)

Depending on the molar concentrations including of those of other ions present, the concentration of CO₂, pH and temperature, carbonate species are able to form by reacting with Na, and the divalent cations of Ca, or Mg (and iron if present) forming end products such as sodium bicarbonate and carbonate as in the Solvay process (which is similar) and thermodynamically stable calcite (CaCO₃), magnesite (MgCO₃) as follows

Unfortunately, the process is in reality much more complex as should be expected with any solution as complex as seawater or brines derived from is which are often supersaturated in calcium. For example, with CO2, the calcium ion precipitates metastable forms of calcium carbonate which are hydrated before forming calcite. At room temperature magnesium ions will first precipitate as nesquehonite then dipingite, hydromagnesite and finally magnesite in a process that can be accelerated at higher temperatures and partial pressures of CO2 as well as by other means.

Because protons are produced in the above global equations, alkali must be added to maintain ideal pH for precipitation. In most of the more recent papers the alkali used was sodium hydroxide. The carbonates can be separated with combined CO2 and alkali addition. 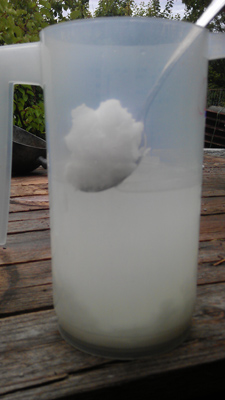 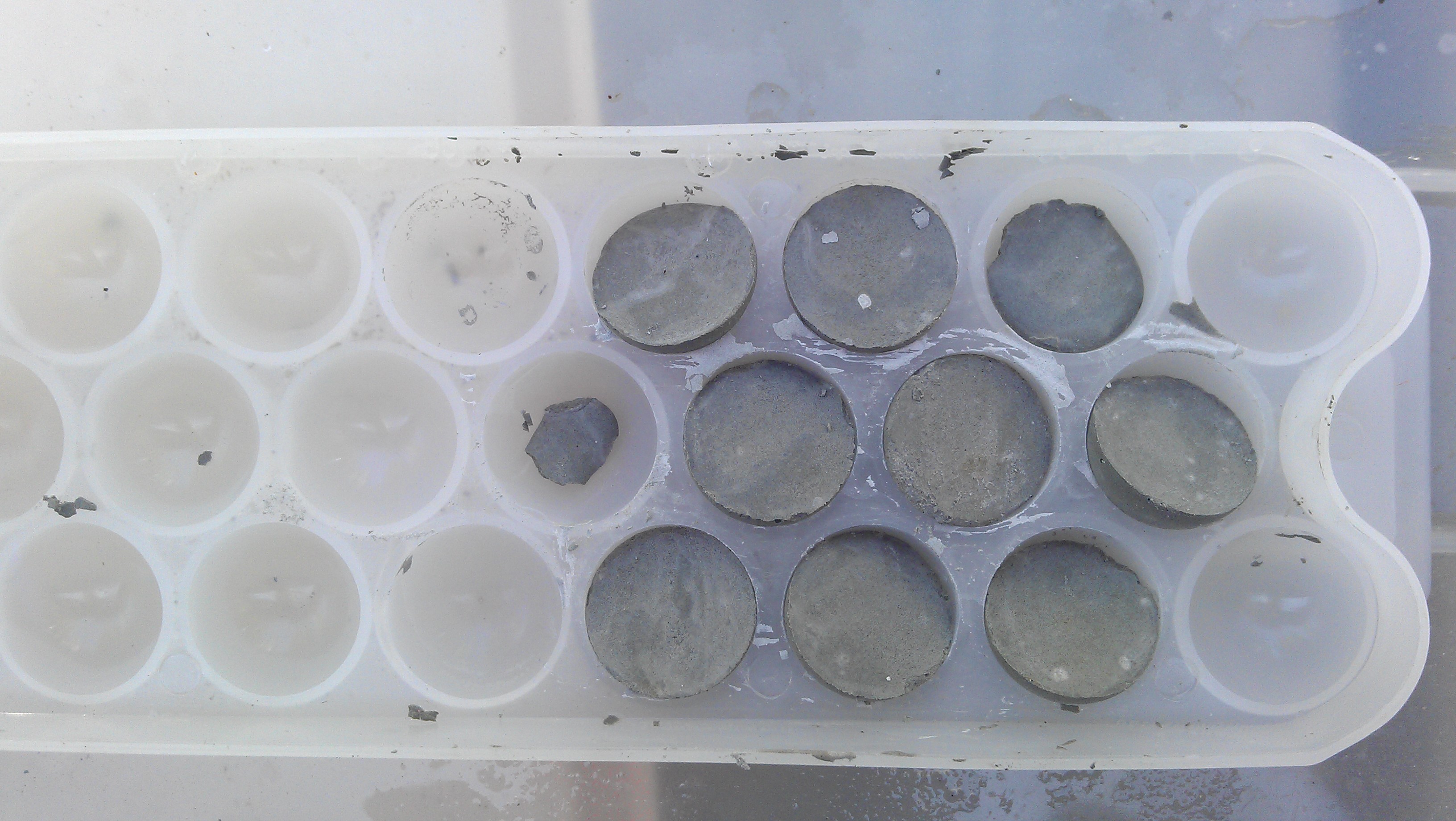 An alternative is to split the process and first produce Ca & Mg hydroxides (or preferably magnesium hydroxide only) and then carbonate. Using this technique it is easier to separate Mg from Ca given the low solubility of Mg(OH)2 at higher pH.

Without Mg surface poisoning supersaturated CaCO3 will precipitate more readily on later carbonation. The Koreans have suggested this and they used desal pre process waste water [1]. So have the South Africans [2].

The solubility of magnesium in FRESH water as a function of pH [3] (at room temperature?).

Pressure is another variable input that should be used as it is not usually difficult to pressurise CO2 when trying to absort it as in a soda making machine. 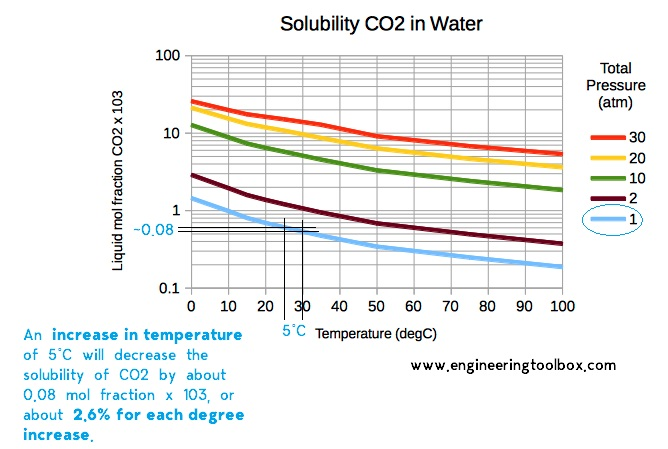 Every paper of the more than a couple of dozen recently read by us used sodium hydroxide as the alkali required to deliver a supply of bicarbonate and carbonate ions. Sodium hydroxide has a carbon cost and if made using the chlor-alkali process it is shared with other outputs and considered for the whole process to be 2.13 tonnes CO2 per tonne of chlorine produced. In this process, chlorine, caustic soda and hydrogen are always manufactured in the fixed ratio of 1.1 tonne of caustic and 0.03 tonne of hydrogen per tonne of chlorine. On a per tonne basis the share of Caustic Soda is 1/2.13 which is just under 1 tonne CO2 to the tonne [5]. According to Letchumi Thannimalay et al., the carbon cost of NaOH is less at 0.6329 kg of CO2 equivalent [6]. Regardless of who is correct. and we think Letchumi wrong, given that the amount of NaOH used is over a kilogram per kilogram of CO2 sequestered [7], We conclude that given present supply chain economics, the carbon and dollar cost of using industrially available sodium hydroxide is too much, it is not a "green" chemical and sequestration using it is not feasible. This may change if future energy costs plummet as anticipated.

At the present time we prefer to use ammonia dissolved in water forming NH4OH as it is more easily made using green chemistry either electrolytically or from sewerage at high efficiency using genetically engineered bacteria [8]. As we learn more about the process discussed here it become possible to blend in some waste alkali from the long list given above.

It makes no sense to be spending money turning nitrogen into ammonia for fertilizer using the energy intensive Haber Bosch process and in sewage plants turning it back to nitrogen. We need all the nitrogen we can get for fertilizer to support an exploding global population and if we have our way, for sequestering carbon and in the process delivering useful minerals.

Ammonia can either be recovered from the process and recycled (as in the Solvay process) or associated with the remaining sulfate and chloride after extracting sodium at high pH as bicarbonate. We intend to extract everything possible including for example lithium and deliver the at least some of the remaining as potable water to a world desperately in need of it.

As the biggest cost is obviously that of alkali, for a gigaton scale process to be viable the supply economics has to change and we think this is already happening with the amazing growth of alternative energy. Some four or five years ago John Harrison gave a talk in China about using flexible processes to balance supply and demand for energy. Using excess energy supply from intermittent sources to flexibly make alkali for sequestering carbon is a potentially viable alternative to batteries in the future to balance supply and demand in an AC grid over supplied at times with energy from the sun (solar, wind, wave, hydro, tide etc.)

No discussion about the state of the science would be complete without a comment about the source of Ca and Mg cations. Consider the remarkably consistent composition of seawater 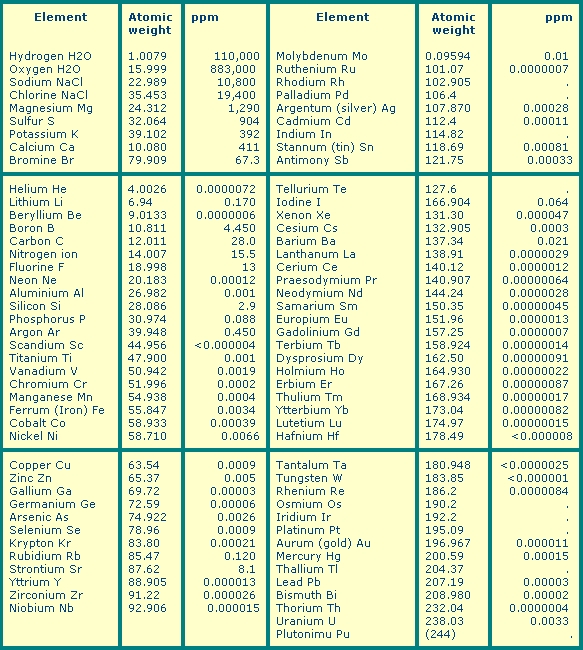 Most noticeable is the abundant magnesium. Of interest is the huge list of rare elements exhaustively listed and that may have significant value as a study of the Wikepedia page giving the prices of critical elements will confirm.

Sequestration using brines is still a relatively new science even though I have found papers about it back to the 60's and a lot of spurious patents besides. The process is the front runner simply because it can create value and as a process mitigate other environmental problems and because the brines needed are everywhere. If we make ammonia from sewage, given over 7.854,035,608 billion of us at the moment of typing this, doing so is not such a bad idea as at least everybody could contribute!

Development should start with what is easy to process such as MgCl2 in global bitterns dumps. Given the environmental problems being caused by desal plant waste water mentioned below, it would then be politically a good idea to couple the process with desal plants. Salt manufacture will never be the same again! MgCl2 bitterns is often found in mounds or waste ponds associated with historic salt manufacture, other industrial wastes, natural salt pans, brine lakes, etc.

Desal waste water is another target brine. In 2019 there were over 16,000 desal plants around the world releasing 142 million cubic metres of concentrated brine daily and the quantities are growing rapidly[10]. Desalination processes should utilise the brine in their plant for sequestration, manufacture of associated building products and a range of other commercial products including common salt. Extraction of rarer more valuable elements such as lithium would strengthen the bottom line.

The opportunity is there to extract everything in brines in close to pure form including lithium and other rare elements to help pay for the process.[4]

For gigaton scale sequestration to be adopted by the world on a large scale it is essential the process is economic and adding value whenever, wherever possible. Syncarb, an associated company have designed a highly modular and very flexible process that we hope will be funded because not only will it help rescue the planet from climate change but will eventually make money without carbon credits.

The owners of desal plants are interested in making more with less energy and if they can produce valuable minerals like lithium for not much more on the energy budget they may well become adopters because it pays not because they want to save our planet from us.

When I first suggested the built environment as a respository for CO2 [11] I admit I was thinking of the magnesium cement system I had just invented. I have realised now that as cements are only a small percentage of concretes that the ideal target for sequestration is aggregates which make up over 80% of concrete and have numerous construction and other uses. A process like our own Syncarb uses can directly use nesequehonite recrystallising to magnesite as the binder. Slightly elevated temperatures and a high partial pressure of CO2 will do this to aggregate stored in warm containments in an alkaline matrix with a CO2 rich atmosphere. Don't worry below 15% CO2 is not lethal, fortunately CO2 at a level well below that is effective!

To all those researchers out there determined to grind out papers and procure spurious patents please note that I have realised since before 2014 that nesquehonite can be added directly to hydraulic cement mixes as an micro-aggregate with ideal crystal structure for strengthening the microstructure thereby reducing the amount of Portland cement required and improving numerous other properties including rheology and shrinkage. If it is dried out a little it most certainly is "cementitious" if you bend the definition enough. Ultimately in such an alkaline environment it will becomes magnesite which will add considerably more strength.

[3] Holmes-Farley, Randy, What is that Precipitate in my Aquarium, reefkeeping.com